Navy women possess some of the most powerful names in the world because they’ve spent their lives defining them. They’ve explored unknown worlds, commanded ships, invented supercomputer languages and piloted fighter jets. Discover their stories, see how they persevered and ask yourself one thing—with so many careers to choose from, what do you want your name to mean?

Commander Kelley Jones was raised to never give up. Growing up in Alexandria, VA, her parents inspired her to give all that she had in school and in life. So, Kelley made a plan to reach for a far-off horizon and do something bigger.

Kelley joined the Navy to start her journey as a Surface Warfare Officer. She led Air Defense Units and Fleet Response Plans as Training Officer aboard the USS Gettysburg and received her Master’s in business, all while serving as senior staff to the Department of State. In 2017, she became the Executive Officer of the USS Donald Cook and, a few years later, the Captain, where she led the first American crew through the foreign waters of the Faroe Islands. Kelley has ventured above the Arctic Circle, into warm seas of the Arabian Gulf, to the coast of Spain and beyond. Her list of accolades is undeniable and Kelley has grown to be unstoppable. A force of energy all her own since she was a young girl, her name can only mean one thing—Determination.

Commander Kristel O’Cañas never saw the point in fitting in—because she was born to stand out. In her hometown of Odem, TX, that is exactly what she did. Every day she learned to trust herself, to have an opinion and to try the tough stuff even if it scared her.

After graduating with a bachelor’s degree in Psychology from Boston University, Kristel joined the Navy to start her journey in the nuclear field through NROTC. She mastered the fields of fission, nuclear physics and fluid dynamics as part of the Nuclear Propulsion Officer Candidate Program (NUPOC). In 2007, she boarded her first aircraft carrier as a Nuclear Surface Warfare Officer. She commanded a team charged with the responsibility of powering a whole ship through humanitarian missions and training exercises both foreign and domestic. Today, she’s the Commanding Officer of the USS Whidbey Island. Every day she made her name mean something she always knew she had—Confidence.

Rear Admiral Sara Joyner grew up watching planes land across the lake near her house. At the time in the 70s, women weren’t allowed to fly military jets, but Sara was never looking at what she couldn’t do. She looked at the world with a “glass-half-full” perspective.

She applied to the Naval Academy and became one of the first women to graduate from its halls. She trained hard to earn her wings as a Naval Aviator in the most advanced tactical aircraft, eventually becoming the first woman to command a strike fighter squadron of her own and then the first woman to command an entire carrier air wing. Today, she has landed herself in the Pentagon as the first female Chief of Legislative Affairs where she works alongside Washington’s leaders. Her resume is filled with firsts, but Sara never set out to be the first—she simply accepted every chance the Navy gave her and made her name mean just that—Opportunity.

Chief Dominique Saavedra was raised by strong, independent women. Her mother and grandmother both fostered her sense of adventure and drive, but her eagerness to speak up and need to “poke the bear” was all her own. So, when the chance to break away from the southern California world she knew came along, she just had to pick up a stick, and see what would happen.

Dominique joined the Navy as a Culinary Specialist aboard ships that traveled all over the world until an opportunity arose that would change her life forever. In 2010, policy changes gave women the chance to serve aboard submarines. Dominique joined a whole group of women to be the first to enter this new world. She worked hard to earn her place, eventually becoming the first enlisted woman to earn her silver dolphins as a fully trained submariner. Today, she is the embodiment of what it means to do more with what you have to give. Dominique is Adventure. 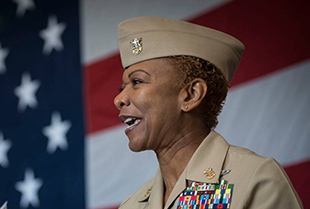 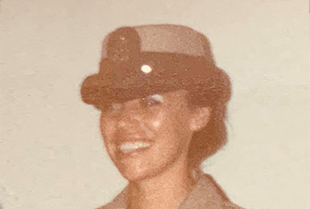 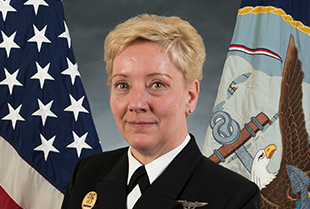 Bio: Ret. Master Chief Linda “Sunny” Fox. First woman to qualify on the 40mm saluting battery as a company commander at RTC Orlando. One who fights back. 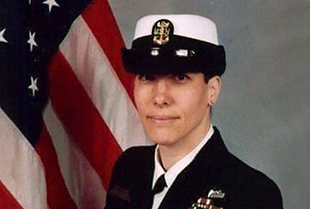 Bio: Senior Chief Jackey Smith. Breast cancer survivor and first Combat Camerawoman to earn the Bronze Star. One in the middle of the action. 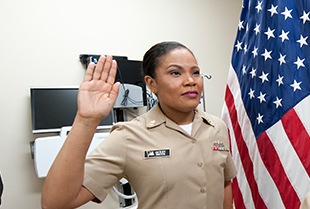 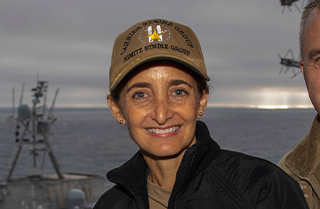 Bio: CAPT Amy Bauernschmidt. First woman to command a nuclear-powered aircraft carrier in history. One who isn't afraid of a challenge.

Bio: VADM Michelle Skubic. First woman to lead NAVSUP and the Navy Supply Corps. One who stands for others. 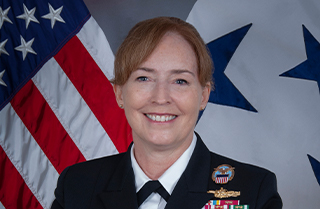