We can’t control the weather. But our Aerographer’s Mates can predict almost every detail to make sure Navy forces succeed in any physical environment. As an AG, you are the expert in meteorology and oceanography. You’ll use skills in science and math to calculate weather patterns, analyze data and distribute forecasts to ships and squadrons around the world, providing accurate measures of air pressure, temperature, wind speed and sea state. As an Aerographer’s Mate, you’re not just a “weatherman”– you’re an integral member of the Information Warfare Community, aiding us with critical knowledge in any battlespace. 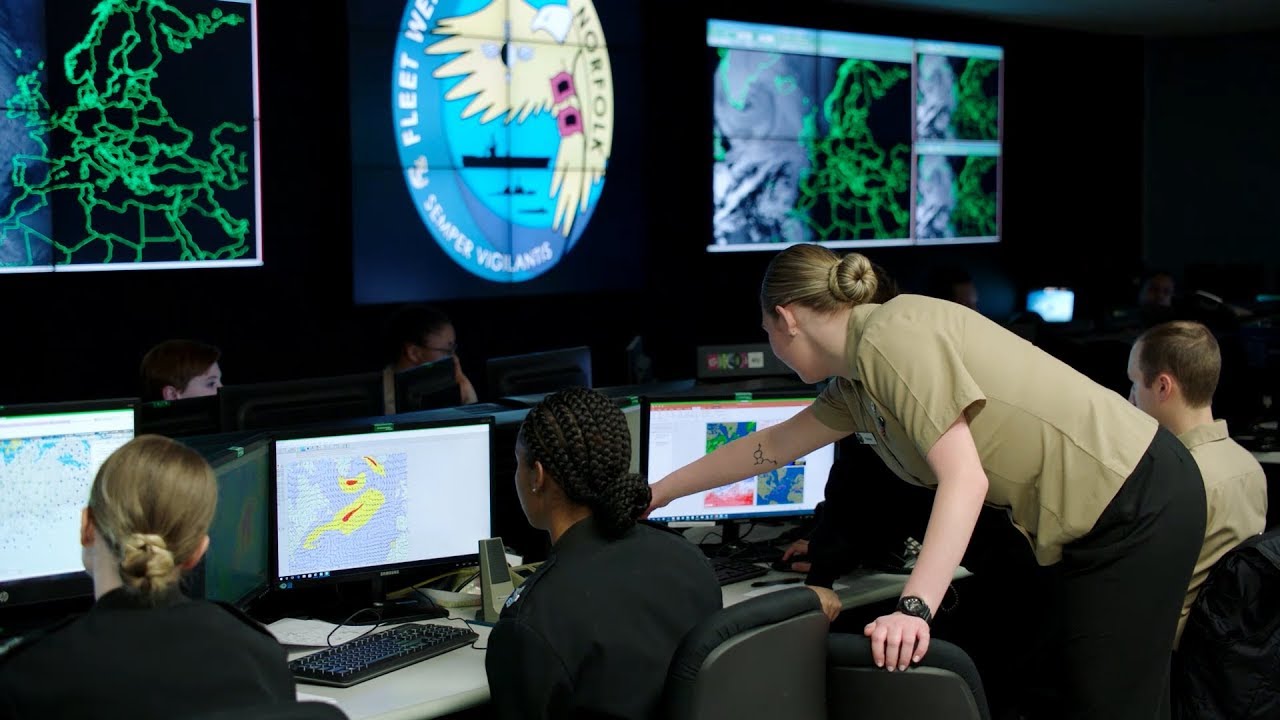 As an Aerographer’s Mate, you’ll supply important environmental information that impacts Navy missions of all types. You will perform duties that may include:

Aerographer’s Mates serve on large ships such as aircraft carriers, amphibious ships and cruisers, as well as at Naval air stations, weather centers and other shore-based facilities located in the U.S. or overseas. The work is highly analytical. Typically, duties are performed in a clean, comfortable office-like environment and involve working closely with others with little supervision.

Upon completion of initial Recruit Training (known as Boot Camp), those pursuing an Aerographer’s Mate role report to Keesler Air Force Base, MS, where they receive formal Navy technical training at “A” School for 19 weeks. Here, they develop a working knowledge of meteorological observation, recording and equipment in preparation for their first assignment.

From there, AGs work toward qualifying as environmental observers and prepare for advanced training through “C” School, which comes with career progression. Over time, they will transition from the role of observer to forecaster to supervisor.

Beyond offering access to professional credentials and certifications, Navy technical and operational training in the meteorology and oceanography field can translate to credit hours toward a bachelor’s or associate degree through the American Council on Education.

A high-school diploma or equivalent is required to become an Enlisted Sailor in the meteorology and oceanography field in the Navy. Those seeking an Aerographer’s Mate position must be U.S. citizens with normal color perception who can meet eligibility requirements for a security clearance. They should have an interest in aviation and weather, good speaking, writing and record-keeping skills; a good working aptitude of math and the capability to do detail-oriented work.

There are part-time opportunities available as an Aerographer’s Mate.

Serving part-time as a Navy Reserve Sailor, your duties will be carried out during your scheduled drilling and training periods. During monthly drilling, Aerographer’s Mates in the Navy Reserve typically work at a location close to their homes

For annual training, Aerographer’s Mates may serve anywhere in the world, whether on a ship at sea or at bases and installations on shore.

Aerographer’s Mates in the Navy Reserve serve in an Enlisted role. Before receiving the ongoing professional training that comes with the job, initial training requirements must be met.