If you can’t find us, it means we’re doing our job.

As a Sonar Technician, you’ll use the most advanced sonar equipment to quietly track contacts that may be lying beneath the waves. Deploy sonar sounds from surface ships and submarines and gather intel from the depths. Sea surveillance is essential to navigation—you’ll be able to track everything from enemy ships, to marine life, while directing your ship accordingly.

Whether you’re in the Combat Information Center of a cruiser or a destroyer, you’ll be collecting intel for the navigation and fire control teams to defend the ship from what lies in the depths.

Serve aboard every class of submarine and specialize in combat-system equipment where you’ll identify, track and collect scientific undersea data used for boat defense and navigation. 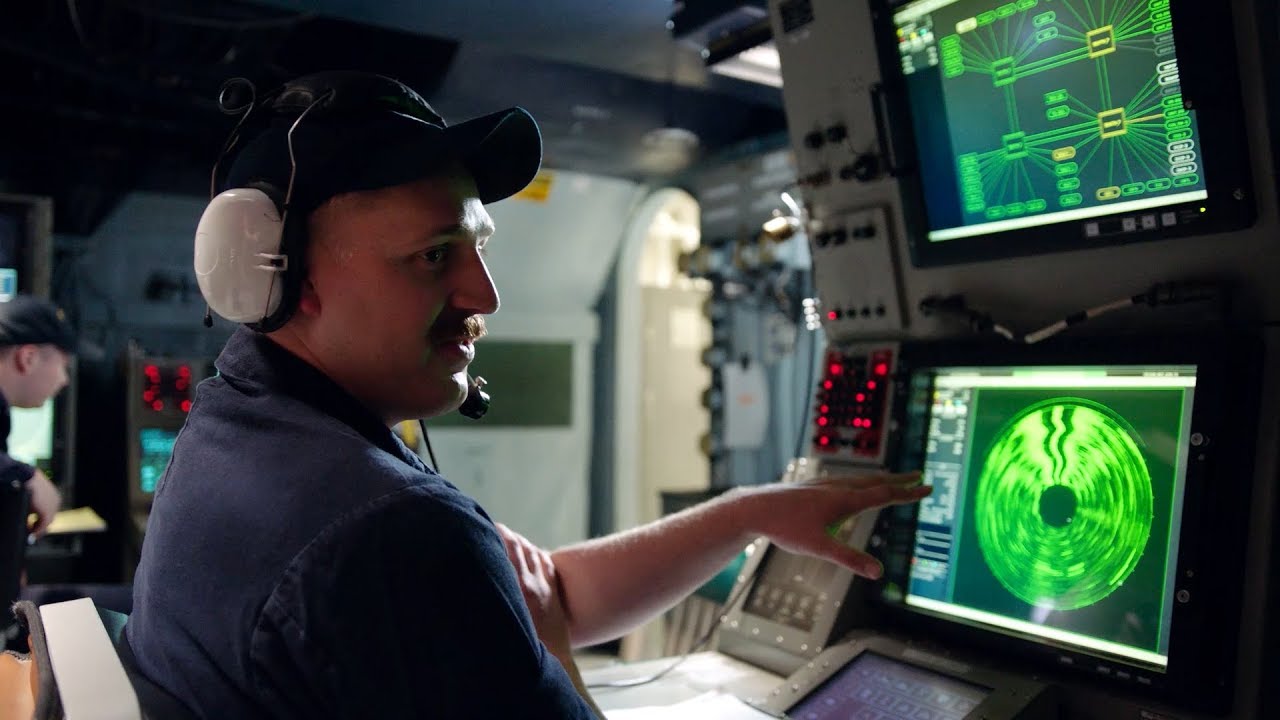 Whether you’re stationed on a ship or submarine for sea duty, or on land for shore duty, all Sonar Technicians can expect to work indoors in a comfortable shop-like atmosphere. You’ll work closely with others using the latest computer equipment with little supervision.

Upon completion of initial training at Recruit Training Command Great Lakes, (known as Boot Camp), those pursuing a Sonar Technician role will report to a technical “A” School based on their specific designation.

Following Boot Camp, you’ll report to a Sonar Technician “A” School in San Diego, CA, for 10 weeks, where you’ll learn the fundamentals of sonar technology with basic operator and analyst skills. Once you complete that course, you’ll spend an additional 6-8 weeks taking a more in-depth sonar operator course. Then, you’ll start your career on a surface ship as a sonar operator—throughout your career you will alternate between service aboard a ship and shore duty on land.

After Boot Camp, you’ll report to Basic Enlisted Submarine School in Groton, CT, for 9 weeks where you’ll learn the basics of submarine systems. Immediately following, you’ll head to an advanced technical “A” School where you’ll learn the fundamentals of basic electricity, computer technology and electronics while preparing for underwater surveillance and scientific data collection aboard submarines. Once you’ve finished schooling, you’ll spend the rest of your career alternating between service at shore commands and aboard submarines in the U.S. and overseas.

Specialized training received and work experience gained in the course of service can lead to valuable credentialing and occupational opportunities in related fields in the civilian sector:

Beyond offering access to professional credentials and certifications, Navy technical and operational training for a Sonar Technician can translate to credit hours toward a bachelor’s or associate degree through the American Council on Education.

A high-school diploma or equivalent is required to become an Enlisted Sailor and Sonar Technician in the Navy. Those seeking this role must have good vision, excellent hearing and normal color perception. They must be skilled in arithmetic, speaking, writing and be able to excel at detailed work and keeping records. You should have an aptitude for science, electronics and technology as well as a strong memory. Sonar Technicians must have no speech impediments. Must be U.S. citizens and eligible for security clearances.

As an STS, you will be required to volunteer to serve aboard a submarine. You may be eligible for additional submarine duty pay based on your merit and time served.

There are part-time opportunities available as a Sonar Technician.

Serving part-time as a Navy Reserve Sailor, your duties will be carried out during your scheduled drilling and training periods. During monthly drilling, Sonar Technicians (STS & STG) in the Navy Reserve typically work at a location close to their homes.

For annual training, Sonar Technicians may serve anywhere in the world, whether on a ship at sea or at bases and installations on shore.

Sonar Technicians in the Navy Reserve serve in an Enlisted role. Before receiving the ongoing professional training that comes with the job, initial training requirements must be met.